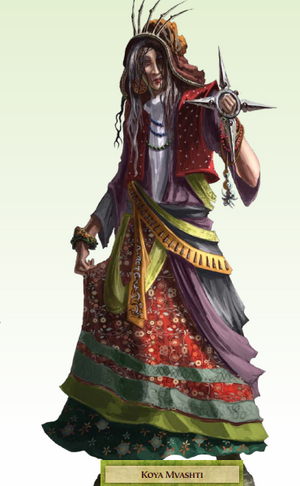 Until she passed away from natural causes just a few months ago, Madame Niska Mvashti was the oldest person in Sandpoint. No one quite knows exactly how old the Varisian seer actually was when she died (she was already old when Sandpoint was founded over 40 years ago)—but the fact that her only daughter Koya is herself an old woman is a telling fact.

Koya has spent a fair amount of her life traveling Varisia with a number of caravans, serving as a healer when she was younger and more recently as a fortune-teller. For the past several years, she’s been traveling with her adopted son Sandru Vhiski on a regular caravan route that travels between Riddleport, Magnimar, and Korvosa two or three times a year. The caravan spends most of its time relatively close to Sandpoint, though, and that has suited Koya fine, since it gave her more time to care for her aged mother.

Since old Niska’s death, however, Koya’s initial mourning has transitioned into a sort of morose melancholy. A life-long worshiper of Desna, she has come to realize that while she has traveled extensively through the Varisian lowlands, she’s never been beyond the region’s borders. Tales of other Desnan explorers have long delighted Koya—even her own mother reputedly took part in several extensive caravans that traveled north to the Lands of the Linnorm Kings and even as far as Qadira. Koya’s having something of a late-life crisis as a result—a growing sense of disappointment that she’s never made a long caravan trek.

With her mother dead, Koya has little reason to stay in Varisia, and she’s been pressuring Sandru to take a long journey soon: “The sooner the better, ’cause I won’t be around for long!” Koya’s in remarkably good shape, physically, for a woman well over 60 years of age—obviously, longevity runs in her family—but with each year that passes, the chance of her having the chance to experience a truly epic journey like the ones in her favorite stories grows slimmer.

Retrieved from "https://abqgurps.fandom.com/wiki/Koya_Mvashti?oldid=4143"
Community content is available under CC-BY-SA unless otherwise noted.