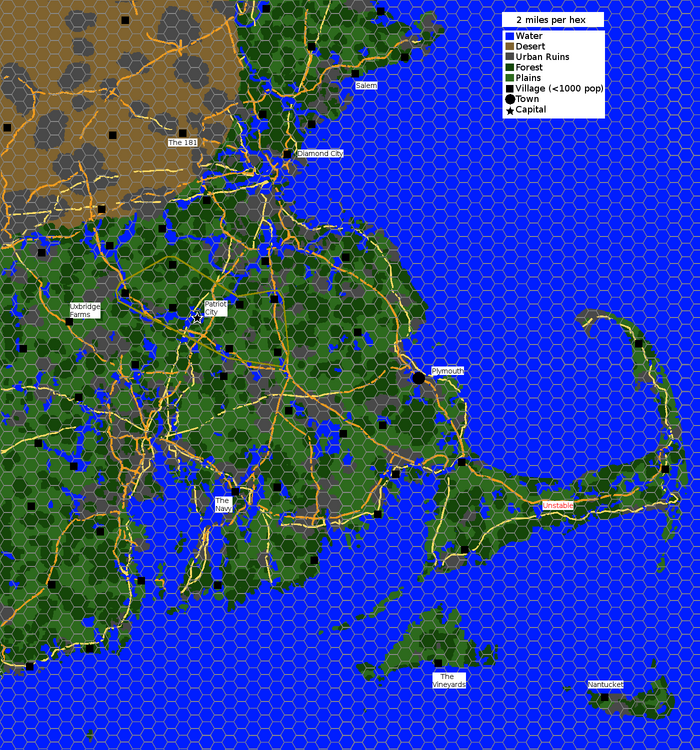 The Boston Commonwealth area is bounded by the Rhode Island-Connecticut border in the west, the southern tip of Martha's Vineyard in the south, the eastern shore of Cape Cod in the east, and the line of the Old Boundary Pine state border with New Hampshire in the north.

Most of the Commonwealth consists of coastal plains. During the Days of Fire and Fog, a tectonic bomb was detonated near Littleton, creating a huge ring of high hills running roughly north of I-90 then north along I-95 and further north around I-93. Prevailing winds do not easily cross those hills, and the area to the west and north of the hills is now the Littleton Desert.

Global warming has heated up the Commonwealth's climate, putting it squarely in the humid subtropical climate regimes and making the weather more energetic in general. Summer highs reach 90+ °F (20 °C) while winter lows stay in the 10°F (-5 °C) range. Snowstorms are common during winter, and suddens rains and thunderstorms are frequent during spring and fall. Hyperstorms and fallout rain are very uncommon, but acid rainstorms coming up the coast from the ruins of New York are an occasional hazard.

The Littleton desert obviously gets much less rainfall than the rest of the Commonwealth, and is not significantly warmer. In the spring and fall, the thunderstorms dump their water in the Salem basin to the east and continue across the border hills, whipping up ferocious sandstorms that are often laced with heavy metals or fallout.

All of the major ruins were at least targeted by neutron bombs or other WMDs. Some bombs may have missed (ie, Boston) or otherwise left most of the town nominally intact, but these are all now abandoned deathlands.

Immediately south of Providence RI and caught in the same nuke probably.

NW of New Bedford, SE of Providence. Caught the wash of the Providence nuke but was otherwise unnuked. Was hit with persistent chemical weapons that only faded within the last few decades and are still active inside buildings.

WSW of Newton (west of Natick)

N of Boston, NE of Lowell, just outside the Littleton Desert.

NW of Boston, NE of Littleon

between Revere and Salem

on the south coast, NNW of Martha's Vineyard.

Immediately north of Providence RI and caught in the same nuke probably.

SSE of Boston on the Bay

North of Boston and Cambridge, probably not nuked just because of proximity.

Immediately south of Providence RI and caught in the same nuke probably.

very western edge of the map on I-90. Nuked.

There are roughly sixty or seventy towns and villages scattered around the Commonwealth, ranging from nearly 6,000 around Patriot City down to as few as 250 in Diamond City. Most are at least nominally democracies claiming allegiance to the United States Federal government, but many in practice are dictatorships under emergency rule and no one has seen a representative of the DC government since soon after the Days of Fire and Fog. The 181 claim authority as a military provisional government, and the pirates of the Vineyard claim to be have had the last legitimate President by virtue of cabinet succession, but no one else believes their claim.

Villages with less than a few hundred population are generally destroyed by gangs, mutants, or raiders, of which there are several thousand scattered around the Commonwealth. Another few thousand people live a nomadic existence as primitive tribals.

Descriptions of the individual settlements can be found under the appropriate region: the Boston Ruins, the Littleton Desert, Cape Cod, North Shore, Atlantic Coast, Rhode Island, and the Carolignias.

Community content is available under CC-BY-SA unless otherwise noted.
Advertisement