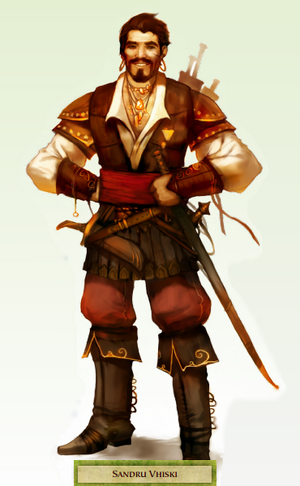 Only a few years from middle age, Sandru Vhiski is a charming man, handsome and irreverent in precisely the ways that could have made him a highly successful Sczarni con artist, even before one takes into account in the fact that his older brother, Jubrayl, is said to be the local Sczarni leader in Sandpoint. The death of their parents during a violent storm, while tragic, was ironically just the thing to save Sandru from life as a Sczarni, for while Jubrayl was old enough at the point to strike out on his own (and thus fell in completely with the Sczarni), Sandru was still a young child.

His care fell to Koya Mvashti, a family friend and practically an aunt to the young Sandru. Under her guidance and support, Sandru managed to avoid falling in with the Sczarni, and when he grew of age, he instead sought employment as a caravan guard.

For several years, Sandru avoided returning to Sandpoint, but after he lost his job in the caravan business, he joined up with a group of adventurers eager to explore the Mushfens, Churlwood, and the Fogscar Mountains. As fate would have it, another former resident of Sandpoint, Ameiko Kaijitsu, was also a member of the group. Sandru and Ameiko hit it off at once and soon became close friends—though both say they have never been anything more than that. Like Ameiko, Sandru earned a fair amount of money during his short-lived adventuring days, and like Ameiko, he doesn’t talk about the reasons why he abandoned the life. When he retired from adventuring, instead of buying a tavern, he bought his own caravan, after which he invited Koya to join him on his journeys, knowing she wanted to see more of the world.

He’s had a few clashes with his brother in the past few years, and you’ve heard he’s increasingly considering taking on a longer-than- normal caravan contract, in part to indulge Koya’s desire to experience a grand journey, and in part to get away from the dangerous influence of his troublemaking older brother and Jubrayl’s Sczarni compatriots.

Retrieved from "https://abqgurps.fandom.com/wiki/Sandru_Vhiski?oldid=4144"
Community content is available under CC-BY-SA unless otherwise noted.