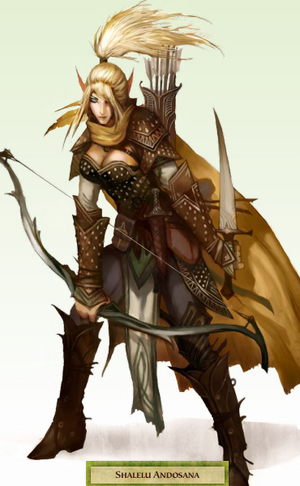 Although Shalelu Andosana is something of a mystery to the residents of Sandpoint, she’s certainly one of the town’s most admired defenders. She doesn’t actually live in town, but she sometimes spends the night at the Rusty Dragon free of charge, thanks to her long friendship with Ameiko Kaijitsu. Everyone in town knows that Shalelu is something of a loner and prefers to spend her time wandering in and exploring the wilderness around Sandpoint. She periodically vanishes from the region for weeks or even months at a time to visit friends elsewhere in Varisia (particularly, it’s said, near Hook Mountain or up north near the elven village of Crying Leaf ), but she never fails to return to Sandpoint.

No one quite understands why she keeps coming back. When asked why, she merely says, “Someone’s got to keep an eye on you all.” Her timely reports of goblin activity have helped save folk from ambushes or warned the militia of possible attacks on the town or the surrounding farmlands numerous times.

Yet in recent days, Sheriff Hemlock has begun taking a more active role in patrolling the surrounding area, and his militia is better trained now than ever before, which means that Shalelu’s aid in keeping an eye on the hinterlands is growing less and less necessary. She actually seems relatively pleased with this development, however, as though she’s proud that Sandpoint is finally starting to look after itself rather than disappointed at not being needed any longer.

She has even started hinting that she’s thinking of taking a long journey away from Sandpoint sometime in the future, but whenever she is pressed for details, she just shrugs and changes the topic. Of the four travelers, Shalelu is the most distant and her motives are easily the most mysterious, but she otherwise seems friendly and helpful enough.

Retrieved from "https://abqgurps.fandom.com/wiki/Shalelu_Andosana?oldid=4147"
Community content is available under CC-BY-SA unless otherwise noted.